ALL YOU WANT TO KNOW ABOUT RUSSELL WESTBROOK…

Today’s guest for our NBA Star Trivia is the madcap quicksilver point guard of the Oklahoma City Thunder, Russell Westbrook…

Born in November 12, 1988, this star player is a truly unique character with his mimics on court, his over identified “gun drawing and holstering back” move after his 3 point hits and numerous eccentric attire outside the court…

And here are the unknown facts of the brand new “Mr. Triple Double”… 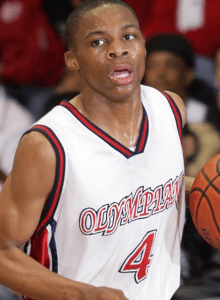 He literally had evolved after the age of 17

Throughout his high school years, he was only 1.75 m (5’8”) tall and weighed 65 kg (143 pounds). His freshman year in the college was no different; but after his sophomore year, he suddenly evolved and reached his current height. By the way, his shoe number was already 12.5 (Turkey & EU: 47) even back in his high school days.

He recorded the second fastest triple double in the NBA history (since 1955), with achieving such success in only 21 minutes. The game was the match against 76’ers that ended 125-92 in favor of the Thunder.

He has his own sunglasses company

Westbrook owns a sunglasses brand named Frames, and it is quite popular mostly around Los Angeles. 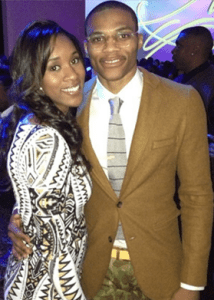 Is he married, does he have a girlfriend?

In the summer of 2014, he got engaged with his UCLA college sweetheart Nina Earl.

Since his college career, he never wore the same dress more than one day in a row.

French toast in breakfasts, hamburger and fries in lunch and catfish in dinner.

As he grew up in South California, his idol was surely from the most popular and successful team of that region, the Lakers: yes, it was, the legendary NBA point guard, Ervin “Magic” Johnson.

He looks alike with whom?

He looks like an identical twin of the “Bodie Bradus” of the TV series, portrayed by the actor J.D. Williams.

He has a younger brother named Raynar.

His blood brother was Khelcey Barrs, whom Russell grew up together with and had incredible physical and athletic abilities which were sufficient enough to be considered as a definite future NBA star player, but dramatically passed away at the age of 16, after a sudden heart attack.

Westbrook still wears the bracelet that has “KB3”, the nickname of Barrs, written on it in the games, for embalming his late dear friend’s memory… 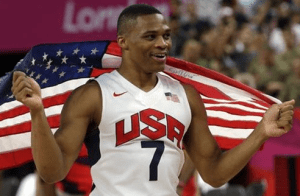 His career is currently devoid of an NBA title, but he earned 2 gold medals with the USA national team; first one was in the 2010 FIBA World Championship held in Turkey, and the second one is from the 2012 London Olympics.

Why does he wear #0 in his jersey?

He originally intended to take #4 in his college years but that number was occupied that time. Thus, he chose #0. The reason for 0 is the motto regarding a fresh new start and every new start initiates from the zero point. 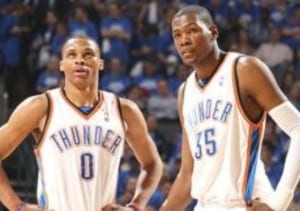 Although he couldn’t manage to reach the play-offs in the 2014-15 NBA season, he was no doubt the sole leader in the absence of his fellow teammate, Kevin Durant, who was mostly injured in the regular season. Westbrook geared his game up by more than one level and recorded a bunch of (some of them were even consecutive) triple doubles in the remaining of the regular season, and proved everyone that he was no pushover, and he is more than a sidekick to Kevin Durant in Oklahoma.

As Derrick Rose, whose playing style and abilities are nearly identical to Westbrook’s, had also became an injury prone player, Westbrook currently carries the flag of the super-scorer, versatile and athletic point guard image as a sharpshooter with also making lethal penetrations with the ball in the NBA.