ALL YOU WANT TO KNOW ABOUT SHAQUILLE O’NEAL…

Today’s legendary player of the NBA Star Trivia is the famous almighty center SHAQ. And when we are saying “SHAQ”, we mean 4 NBA Titles, 1 Olympics Gold medal, 1 FIBA World Championship Gold medal, 3 NBA Finals MVP Awards, 15 All-Star appearances, numerous records and countless rewards. But what we really mean is, the most dominant player of the NBA’s modern era basketball! A superstar? Nope. He is the “Shaq Almighty”!

Meaning of his name

How many children does he have?

He has 4 children from his former marriage with Shaunie Nelson, and another daughter from his another former relationship with Arnetta Yarbourgh (Taheara); so he has 5 children in total.

Louisiana State University (He didn’t graduate then though; he became early professional after his junior year)

O’Neal kept his promise he gave to his mother after he joined the NBA without graduating from LSU, and got graduated from Phoenix University. In fact, his head coach in Phoenix helped his academic career, by giving him permission to attend the classes in university when they were playing Home games.

Indeed, what made him a legend was his ability to combine such huge body with incredible athleticism and vertical jumping skill and also, combining these with a great fundamental and passing skill.

Let us note duly for newer generations that are unaware of Shaq; he was a delicate athlete who can reach 3,75 meters when he jumped and was the one-man fast breaker with running faster than his every other teammate in fast breaks. He was not bulky at all before the injuries!

He is the ultimate figure in the enhancement to the Millennium Hoops steps for the NBA; as he broke 17 basket rims and backboards in his youth, with also breaking the backboard in two separate occasions in his early career in NBA! (https://www.youtube.com/watch?v=LGRAE-y851M)

One of his old nicknames was thus the “Backboard Breaker”. NBA had to re-enforce the hoops after his arrival to the game immediately.

He lived in Germany for a short while

After the divorce of his parents, his mother had married again and as his step father was in military service in US Air Force based in Germany, the family had to be relocated and Shaq also had to move in with them in Germany for a little while.

The basketball legend that he admires most

Bill Russell. (E.N.: They were also close friends, as Mr. Russell, the biggest “winner” and “post defender” of all times took care of Shaq in his early career, talking to him and helping his adaptation in every possible occasion. So, unlike Wilt Chamberlain, who was in fact the true ancestor of Shaq’s physical dominant game, Russell was like a mentor and dependable friend for Shaq. This made Shaq admire Mr. Russell more than ever and anyone).

The best player he played together with

Dwayne Wade, whose nickname was also set by O’Neal; “The Flash”.

He wore #33 in his college career but he had to take #32 when he arrived to the Orlando Magic, as Terry Catledge was the owner of #33 in Orlando back then. When Shaq had signed with the Lakers, he took #34 as jersey with #32 and #33 were retired with dedication to Lakers legends Magic Johnson and Kareem Abdul-Jabbar respectively. Furthermore, when he moved to the Miami Heat, he again was unable to wear #33, as that jersey was retired with dedication to the great “Zo” Alonzo Mourning, and thus, Shaq continued his streak with #32 just like in his old Florida days in Orlando. Moreover, as the Suns also retired the jersey of Alvin Adams (#33), Shaq couldn’t wear #33 in Suns, and wore #32 for one more time. Though he managed to rejoin his sweetheart #33 in his Cavs years, he had to switch his jersey number to #36 in his last stop (Celtics career), as #32 was retired for Kevin McHale and #33 was retired for Larry “Legend” Bird, and Shaq’s age had reached to 36 at that time.

Blue and green (E.N.: Blue can stand for his Magic run, in which he began his career, and green can refer for the Celtics, his last team before retirement… Interesting coincidence…)

He was the youngest member of the 50 Greatest Players of the NBA History list announced in 1997 All-Star game. Though he didn’t won any NBA titles or wasn’t even an NBA veteran at that time (he was just in his 5th year in the NBA), his controversial selection to the list turned out to be a real accurate action and wise prediction of the jury. Pursuant to such interesting conditions, he continues to be the only player on that list that was not inducted to the NBA Hall of Fame. This fact will change in 2017, where Shaq becomes eligible for Hall of Fame induction according to the rules.

The sports he used to do before basketball

Macaroni and cheese, and fried chicken

Favorite place for a vacation

His biggest regret in basketball career 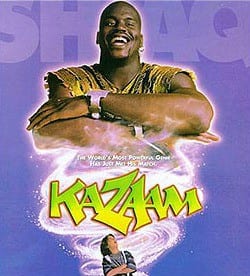 Shaq is also pretty active and popular in off-court areas, he produced many singles besides the albums and movies and participated countless TV Shows throughout his life. As he became a true wise entertainment figure on TV, he nowadays became a color analyst in the “Inside the NBA” program of TNT, together with Ernie Johnson, Kenny “The Jet” Smith and “Sir” Charles Barkley.

His first album was the Shaq Diesel (1993), whereas his first film was Blue Chips (1994), in which Nick Nolte was the heading role. This was followed by Kazaam (1995), where Shaq was the heading role with portraying a genie who devoted his life to Rap and Hip-Hop.

From his debut in 1992 to his retirement in 2011, he played for Magic, Lakers, Heat, Suns, Cavaliers and Celtics. He won 3 NBA Titles with Lakers in a three-peat run, and another Title with the Miami Heat in 2006.

Only 2 players could manage to dunk on Shaq in those 19 years!

These players were Derrick Coleman (who was a member of the Nets back then in ’92, which was Shaq’s rookie year), and “His Majesty” Michael Jordan. (E.N.: Keep in mind that “dunk on” is not equal to “dunk by”)

A Celebrity relationship that became a Guinness World Record!

He is a Muslim

O’Neal declares everywhere that he is a Muslim, but he says that he is not a fanatic or a bigot; as he speaks that “My father is a Muslim, my mother is Baptist (a sect of Protestant church), my best friend is a Jew. I actually am not connected to a belief, I believe in God solely. I had been taught to avoid judging people just because of their beliefs” and shows that he is not a biased man.

No matter what playing style a fan likes, Shaq is the most dominant figure of the late 90s and early 00’s basketball era, and definitely one of the 5 biggest centers of the NBA history, generally together with Bill Russell, Wilt Chamberlain, Hakeem Olajuwon and Kareem Abdul-Jabbar…