ALL YOU WANT TO KNOW ABOUT MICHAEL JORDAN…

Today’s NBA Star Trivia belongs to supposably the greatest contester of this sport branch throughout its history, who may most possibly endure such title to the end of the future.

It is a tricky thing to reveal the facts of a sports figure that has a widely known life in every respect, as there can be just tiny little portions left to be unveiled about his story, but we hereby present you the uncommon trivia about Michael Jordan’s life, that will be mainly composed of topics apart from basketball.

North Carolina (He did not graduate though; he became an early professional after his 3rd year)

How many siblings does he have?

He was born as the 4th of the 5 siblings. He has 2 older brothers named Larry and James R. Jordan, and an older sister named Deloris, and also has a younger sister named Roslyn.

How many children does he have?

He was married twice and has a total of 5 children from those marriages.

In his every single game in the Bulls franchise, he wore the shorts in which he won the NCAA championship with the North Carolina under his Bulls short. This is also the main reason for him to wear longer shorts, which was really uncommon at those days of the NBA, and this selection created a fashion which is still lasting.

Same meal before every single game! No true exceptions!

Nearly throughout all of his career, he ate the same meal 4 hours prior to the matches; 23-ons of meat, baked potato and ginger ale.

When he was a kid, Jordan saw one of his friends got drowned. Also, he himself was nearly drowned when he was 11 years old. These experiences generated a phobia in his mind. After all these years, he got through such phobia but he still can’t get along with water very much

Of course, the Nike brand which was his sponsor in his career (nearly got over-identified with Jordan), and the most famous 1996 movie Space Jam, in which Jordan was the leading role and made approximately 350 million $ box office.

Contrarily to most of the professional basketball players, Jordan does not have a clearly visible tattoo. Still, he has a tattoo on his chest which is the Greek Omega letter. This tattoo represents his loyalty to the Omega Psi Phi community in the North Carolina college. This community has been established many years ago and is mostly composed of Afro-American students.

His father was murdered

This incident was the main reason for Jordan’s first retirement from the basketball. The father of “His Majesty” was shot to death by two men while he was sleeping in his car. Both of the murderers were sentenced for life, but still this disaster truly corrupted Jordan’s psychology. If there was no basketball love left in his heart, he couldn’t get over this trauma.

His idol NBA player in his youth

He was selected as 3rd overall in 1984 NBA Draft, not as the 1st overall pick!

Well, the 1984 NBA Draft, together with the 1996 and 2003 Drafts, is widely accepted to be the best draft class of all times. 1st pick was the great Hakeem “The Dream” Olajuwon, which turned out to be an undisputed success of the Rockets franchise. But 2nd pick was… Sam Bowie, whose career was truly diminished by long injuries. In fact, despite the good outcome of his NCAA years, Bowie was considered to be the worst choice of the entire NBA Drafts history.

It is a shame that Blazers were struggling to find a good big men in the Center position even back then, but when we compare the careers of Bowie and Jordan, and several other later picks in that draft such as Charles Barkley and John Stockton, Bowie can be really considered as the worst pick ever in the NBA Drafts... (E.N.: The 1984 Draft was also the first ever draft that was announced by the NBA Commissioner David Stern)

(E.N. 2: There is also an interesting speculation about this draft; before the ’84 Draft, both the Blazers and the Bulls have offered the Rockets their 2nd and 3rd overall draft picks in exchange for the mighty center Ralph Samson. However, Rockets rejected those offers on two main grounds; first one was Sampson’s then-increasing spectacular superstar career which was clear from injuries at that time, and second one was that Rockets didn’t have faith in Jordan and they didn’t think he has what it takes to make a team champion. Think about it… Jordan and Olajuwon, instead of the original “Twin Towers”… Sampson was indeed a one-of-a-kind super center, but Olajuwon-Jordan duo will… Well, who knows what will happen?)

The legendary North Carolina Tar Heels coach Dean Smith. The relationship between the late coach Smith, who passed away in the February 7th of this year, and MJ’s successes was a really arguable fact for many people, as Smith was accused with holding back the scoring abilities of Jordan intentionally in his college career. However, Jordan spoke for his side when coach Smith had passed away and said that Smith was the ultimate mentor for him and taught him to become a team player and a true winner mentally, instead of being just an individual superstar. He dedicates his every success to coach Smith’s schooling.

All Times) and several other nicknames. However, the most popular one is, without a doubt, the “Air Jordan”

Playing golf, spending time with his pets, reading about history and many other genres. Though it is claimed that he dropped it nowadays, he is also a great gambler with a habit of compulsive gambling. (E.N.: Goes without saying, it is not a surprising fact that he is best friends with “Sir” Charles Barkley)

Favorite sports as a child

Why #23 and what is his favorite jersey number?

Since his childhood, his favorite jersey number was 45 but as his older brother was wearing that number, MJ couldn’t take it. Thus, he selected number 23, which was slightly more than the half of 45 (22.5). Other than some little exceptions (he wore 45 in several games when he came back from his first retirement , and wore #12 for just 1 game against Orlando due to his #23 jersey was stolen from the locker room), he always chose #23 in his jersey.

Yes, Jordan’s jersey was once stolen in Orlando, forcing him to wear the number 12 with no last name!

On Valentine’s Day, 1990, a still unknown thief stole Michael Jordan’s jersey right out of the locker room just a bit over an hour before tip-off. As neither Jordan nor the Bulls were able to recover the jersey and as they became unsure what to do, the Chicago Bulls had Jordan try on a fan’s replica jersey, but unfortunately the fit was too small. The equipment manager of the Bulls then came up with an extra jersey kept for emergencies that simply had the number 12. It would have to do to stop this embarrassment, and it did. As also confirmed by MJ, this was one of the most irritating incidents in his whole life. 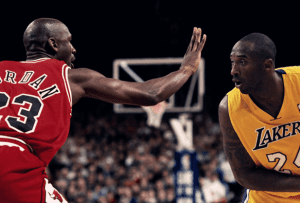 When Michael Jordan’s father was fixing things around the house, he’d stick out his tongue. Jordan says that this habit was originated from his grandfather, as a symbolizing reflex of pure heavy concentration.

For his first year out of retirement with the Washington Wizards in 2001, Michael Jordan was paid $1 million by the Wizards, and he gave away this sum entirely; as Jordan decided to help the recovery effort of the tragic events of 9/11 which had happened just a short time before the NBA season was set to start.

And as we all know, he was not a fringe player at all when he was playing for the Wizards; Jordan went on to lead the Washington Wizards in points, assists and steals that season. This also shows his generosity by all means.

The Miami Heat also retired his #23 jersey out of respect

The first jersey that the Miami Heat ever retired in the franchise history was Michael Jordan’s #23. Though they had a very fierce rivalry when riley was the coach of the New York Knicks, this ultimate tribute was a sole effort of the great coach “Godfather” Pat Riley, who had coached against Jordan many times when he still played with the Chicago bulls. Riley was then the president of the heat, and showed his respect with these exact words,

“No one will ever wear number 23 for the Miami Heat. You’re the best,”

Jordan thanked back to Riley’s gesture and the rivalry with the Knicks in his Hall of Fame induction speech (E.N.: With excluding John Starks of course :))

He owns the Charlotte Bobcats (changed backed to Charlotte Hornets again since 2014) of the NBA. Besides, his name is a trademark itself and he owns his own sports shoes brand “Jordan” which earns a great revenue world-wide. So he gains millions of dollars by the copyrights, trademarks, brands and advertisements together with Hornets ownership, even if he decides not to do anything further. In fact, he is a member of the billionaire club and is one of the most wealthy sportsmen around the world.