ALL YOU WANT TO KNOW ABOUT BLAKE GRIFFIN…

Place and Date of Birth 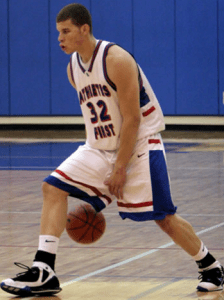 His father carries Afro-Haitian origins, where his mother is a white American

He has one elder brother, Taylor Griffin, who although is not as quite popular as Blake, was drafter by Suns in 2009 and now continues his career in Italy’s 2. League

Favorite Sports in His Childhood

His Favorite Sportsmen Who He Wants to “Be In Their Shoes”

Never Went To School Until He Was 14!

Together with his brother Taylor, Blake didn’t go to school from the 1st grade until the end of junior high. The  home-schooling method that was utilized by their mother and special tutors, who teach the elementary knowledge to the kids in their own house, is forbidden in Turkey, but they are allowed and welcomed to do so in the US. 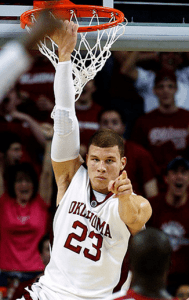 He had a nasty stress fracture injury in his left kneecap when he was playing his final pre-season game in the Summer Camp, just before the start of the season he was drafted. This made him skip that whole season, just like Nerlens Noel and Joel Embiid did recently

Regained His Physical Status With The Help Of “Hell’s Trainer”!

After his season-ending injury, Griffin chose to work out under the coaching of Frank Matrisciano, who goes by the name “Hell’s Trainer” in the business due to his ruthless but truly effective work-out programs. As being a true fighter, Griffin managed to become one of the few graduates that could survive Matrisciano’s fitness program and emerged as a first-class athlete

Red and Blue (Editor’s Note: As being a Full-time Clipper up to date, this is no surprise, eh?)

This was his favorite habit as a child; he used to climb to the trees for hours and try to reach to the highest point he can get fearlessly every day.

Favorite NBA Franchise In His Youth

Favorite Basketball Players In His Childhood

Favorite Baseball Team As A Child

Best Friends In His Childhood

The NFL player Sam Bradford and Xavier Henry is his closest friends, as they grew up together in Oklahoma. Another NFL player, Wilson Holloway, was also one of the closest, or even maybe even his best friend, until he passed away due to cancer disease in 2011. 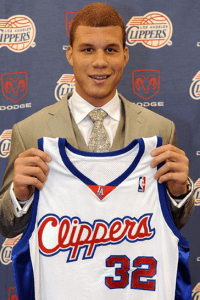 Is He Married, Does He Have Children?

He has a son, Ford Wilson Cameron-Griffin. Though they are separated nowadays, the mother of his son, Bryn Cameron, was also a famous NCAA / USC player. 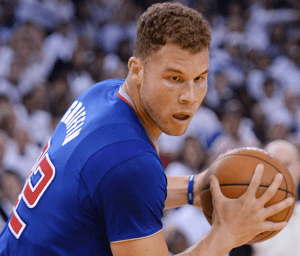 His All-Time NBA Squad (Starting 5) To Play Alongside Him

Though he is a white player, he is widely known for his monster dunks even in his height and weight, and carries the “power dunking” legacy of an NBA legend, “Reign Man” Shawn Kemp, and “Dr. Dunkestein” Darrell Griffith. He have posterized nearly every big-man opponent who dared to contest his dunks until this day, and his main victim was Timofey Mozgov

Besides being nominated to NBA All-Star teams 5 times (2011-15), being selected to All-NBA Second Team 3 times, All-NBA Third Team in 2015 and achieved the Rookie of the Year Award in 2011 (by far) already, he also had won the 2011 NBA Slam Dunk Contest. His most known dunk was the one with him dunking over a car in the final round