Manchester United forward Robin van Persie is flying to Istanbul on Sunday and will be presented as a Fenerbahce player on Monday.

The 31-year-old “Flying Dutchman” had the first part of his medical in England on Thursday and is set to a sign a four-year contract with Fenerbahce, the clubs having reportedly agreed a fee. 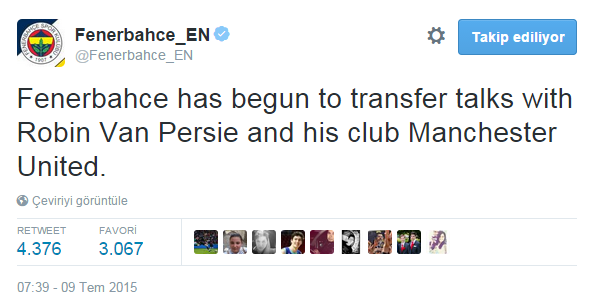 Van Persie has a year left on his United contract but now looks set to link up once again with his former Old Trafford team-mate Luis Nani.

Van Persie has been one of the most prolific goalscorers in the Premier League since joining Arsenal from Feyenoord in 2004.

He moved on to Manchester United for £24m in the summer of 2012 and played a key part as they won the Premier League title in his first season at Old Trafford, winning the Golden Boot which is awarded to the top-flight’s leading scorer.

The Fenerbahce fans greeted Nani ecstatically when he arrived in Turkey and Van Persie is likely to receive a similar welcome this weekend.