ALL YOU WANT TO KNOW ABOUT STEPHEN CURRY…

Who is the current champion of the NBA? Yep, it’s the Golden State Warriors, with the help of their brand new “MVP”, Stephen Curry. We proudly represent the unknown facts of the older Splash Brother in today’s NBA Star Trivia, who quickly became one of the best scorers and sharpshooters of the NBA history… 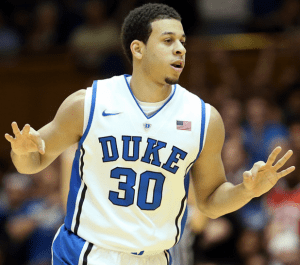 He is the eldest child of his family. He has a little brother, Seth, who also plays professional basketball in NBDL (and was a pupil of the great coach K, Mike Krzyzewski in Duke), and also a little sister, Sydel, who plays volleyball in Elon University.

What is his first name?

His full name is II. Wardell Stephen Curry. His father, the famous former basketball player Dell Curry was abbreviating his second name in daily life and calling him “Steph”. Thus, “Steph” prefers to use the name Stephen instead of Wardell.

Burger King commercial with his father in his childhood

Curry met with the cameras when he was only 10 years old, where his father, a star basketball player of his time, has shot a Burger King commercial together with Stephen. This was Stephen’s first professional experience in his life. 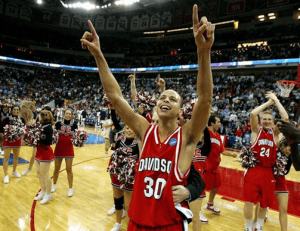 His father was also a famous NBA player

Yes, Stephen’s sharpshooting ability and precision is inherited from his father Dell Curry, who had played for 5 different teams (Jazz, Cavs, Hornets, Bucks and Raptors) in his 16-year NBA career and scored 10.000+ points, and widely went by his great 3-point shooting skill. Especially in the Hornets duration, where he spent his 10 years, he became (and still is) the all-time scoring leader of the franchise with 9.839 points.

Sport-injected genes Part-2: His mother was also an athlete

His mother Sonya was a volleyball star in her college years. She had a very good run in her Virginia Tech career, and also played basketball when she was in Ratford high school, in which she had won state championships.

Everyone knows him as a great basketball player, but he was just as impressive in Golf as basketball in his youth. In fact, there is no clear answer for the question whether he was more successful in golf or basketball in his college years! 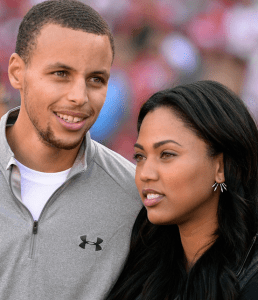 A love began in the church

As a devoted Christian, Stephen even met with his current wife Ayesha Alexander in the church when he was only 15. The couple had married in 2011 and has two daughters: Riley and Ryan Carson.

When Stephen was in Davidson College, he played with averages such as 25.3 points, 4.5 rebounds and 3.7 assists and he became the second in the list of freshmen who scored the most points in his first year in college (first player of that list was the 2014 NBA Regular Season MVP Kevin Durant, who was picked as 2nd overall in the 2007 Draft). He also broke the NCAA freshman season record for 3-point field goals made in the same season, and was named Southern Conference Freshman of the Year, SoCon Tournament MVP, and selected to the SoCon All-tournament team, All-freshman team, and first team All-SoCon (Southern Conference). (E.N.: LeBron James had personally texted him after his second year in the NCAA tournament with declaring his appreciation for Stephen’s game even back then. This was really a proud moment for the youngster Stephen back then. They met in last year’s NBA Final, where Stephen’s Warriors have beaten LeBron and the Cavs… What an amusing fate!)

Meaning of #30 in his jersey

His father, Dell Curry had also wore #30 in his jersey throughout his all career. Stephen thinks that this is like an issue of entrust and keeps wearing his father’s jersey number in his career until he is retired. He has the ultimate respect for his father by all the means. 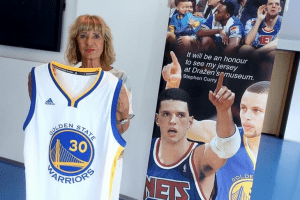 A tribute to the “Mozart” of basketball

During the 1992 All-Star Weekend, his father entrusted him to Biserka Petrović, mother of future Hall of Fame player Dražen Petrović, while Dell Curry competed in the Three-Point Shootout together with Dražen. Following the 2015 NBA Finals, Curry gave Biserka one of his Finals-worn jerseys, which will reportedly be added to the collection of the Dražen Petrović Memorial Center, a museum to the late player in Zagreb, Croatia. This also showed his perception of respect to “Basketball’s Mozart”, who was indeed one of the greatest basketball players and shooters that ever played this game. Goes without saying, Biserka Petrović was more than happy to add the champion’s jersey to the museum, as it was a great tribute to the memory of great late Dražen Petrović.

The older one of the Splash Brothers has two Gold medals in international tournaments, with both of them were acquired in World Basketball Championships under the USA jersey. First gold medal belongs to the 2010 World Championship held in Turkey (he played against Turkey in the final), and the second gold has been acquired in 2014 World Championship held in Spain (he again played against Turkey, but this time it was a group phase game). He won his first (and currently, the only) NBA Title in last summer with the Warriors.

The elder of Stephen’s two children, Riley, has became like a mascot for the team at the post-game press conferences. Stephen occasionally brings his daughter together with him to the conferences and she’s getting used to the cameras and the crowd’s attention, in fact, she became a regular source of joy for the team and the press.