ALL YOU WANT TO KNOW ABOUT JAMES HARDEN…

“Mr. Beard”; he not only is the most important player of the Houston Rockets, but also is one of the biggest superstars among the NBA for several years now, is the guest of today’s NBA Star Trivia. You can find out how many points he scored in games, how many awards he has, what number he wears on his jersey or what teams did he play for with a single 10-second search in Google, that’s for sure; but here are the real unknown facts about him!

He generated a trademark as a NBA superstar with his beard in addition to his playing style. He firstly had his facial hair grown when he was in high school and he didn’t shave his beard even once since he participated and got drafted in the NBA Draft. The superstar who will become 26 years old in 3 months declared that he had grown together with his beard and he believes the beard became a kind of his luck charm, so he said that if he ever shaves his beard, he is going to feel that a big part of his body was gone. When he had won the Sixth Man of the Year Award in 2011-12 as a member of Thunders, he claimed that he will never shave his beard, with refusing the counter offer of the commentator which was 1-million$ worth. When the commentator wondered that if he was going to change his decision if the offer was raised to 10 millions, he said cartoonishly that he might then consider his decision again. We can’t be sure about whether he is going to shave his beard ever, or when he would do such thing, but he keeps living with those facial hair since 2009.

Everyone has an idol. Harden’s idol is the legendary Spur, Argentinean Manu Ginobili. It is clearly a certain fact that Harden thus inherited his Eurostep move from Ginobili! Not only with their “driving to the basket” similarity; but the uncanny resemblances between their playing styles make us see without a doubt that Harden has memorized these “Made in Manu” moves. 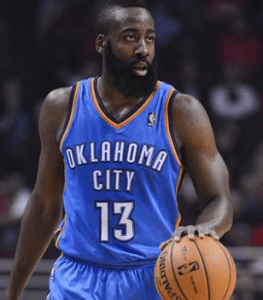 Sixth Man of the Year Award

Sure, this is an annual award but JH was only 22 when he had won this award and pursuant to such achievement, he became the second youngest player to win this award in the NBA history. His numbers were 16.8 ppg, 4.1 rpg and 3.7 apg.

For reminding purposes; it was Ben Gordon who became the youngest player ever to achieve such award, as a member of the Bulls in 2004/05 season.

It might be an interesting news for those who does not know this fact, but Harden was truly bothered by this illness since his high school years, and due to such condition, he had to limit his time in most of the games throughout his college (Arizona State) years and also had to use a tool for curing his fatigue. 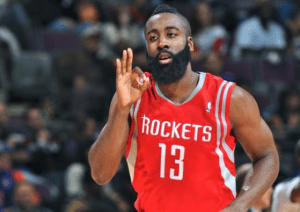 He was born to the parents James Edward and Monja Harden, in California. He has 2 older brothers; one is 14 years older than him, while the other one is 10 years older. His relationship with his mother is fairly well but he can hardly ever get along with his father. Since high school, he had broken his ties with his father, who was dismissed from the Navy due to his drug abuse; and this is the main reason for James Harden to avoid using the “Jr.” term in his name.