ALL YOU WANT TO KNOW ABOUT PAUL PIERCE…

Today’s honorary guest of our NBA Star Trivia is the almighty Paul Pierce, a.k.a. “The Truth” of the NBA history, who won 1 NBA Championship, 1 Finals MVP Award and nominated to the NBA All-Star teams for 10 times…

Here are the unknown facts about Mr. Pierce, who recently signed a 3-years 10M USD contract with one of the championship candidates of the season, L.A. Clippers..

Place and Date of Birth

The Truth (Eponym of this nickname is nobody but Shaq, who came with this nickname in the press conference after a Lakers – Celtics game played in March 13, 2001, where Pierce had nailed 42 points)

What did he want to become when he was a child?

Garbage man (No kidding, he used to love to watch them working from his window and as he found their job amusing, he was dreaming to become one of them)

Is he married, does he have any children?

He is married; his wife’s name is Julie, and they have 2 daughters and 1 son together

His idol in basketball

His dream after being retired from basketball

Tour around the world with his family

Rap indeed, but he listens to almost every genre

Green (Editor’s Note: Surprised? He is a life-time Boston Celtic)

He likes to play Baseball and American Football, and loves to watch Tennis

His Favorite Team In His Childhood

As he has born and spent his childhood years in California, his favorite team was without a doubt, the L.A. Lakers back then – ironically, he became a long-time troop of their archrivals, the Boston Celtics

This has an interesting story because it has no clear reason. In his high school tenure, there was only one jersey in the school equipment that had fit his size, and that jersey’s number was 34. As he had to wear that jersey in high school, he kept this practice running in the college and also in the NBA, because he believed that it was like a good-luck talisman. In his 17-year NBA career began with the Celtics and then continued with Nets and Wizards and maybe to be finalized in Clippers, he wore (and still wearing) #34

He was stabbed in 11 places, but played in an NBA game only 3 weeks later!

In 2000, he was stabbed in 11 different places in a bar fight but still could managed to play in a match only 3 weeks after that incident. Moreover, he played in all 82 games of that season. The two things saved his life was being too close to a hospital that night and they were able to transport him to the emergency room in no time; and the fact that the stab wounds were not really deep due to the leather jacket he was wearing that night. His cure and his belief in Nietzsche’s aphorism “What does not kill me, makes me stronger” enabled him to make some shooting practices only 2 weeks after that incident.

Pierce is widely known as being one of the best clutch time shooters of all basketball history, regardless of the importance of the game. 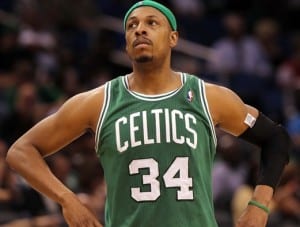 Together with the championship he won in 2007-08 season, swingman Pierce also managed to carry the Celtics to 2 NBA Finals and score 24.021 points in his tenure with in Boston, which brings him to the second place in the all-time scorers list of the Celtics franchise (being just behind of the all-time leader, John “Hondo” Havlicek). He also grabbed 6651 rebounds, dished 4305 assists and made 1583 steals and 668 blocks in his career with the Clovers.