ALL YOU WANT TO KNOW ABOUT KEVIN DURANT…

Almost everyone that has an interest for basketball follows this 6’9″ superstar, who has born in 1988 and is one of the 2-3 most crucial players currently in the NBA, and views him favorably…

His annual stats can be reached by a single click in Google.com,

But today, we hereby reveal the unknown trivia of the Oklahoma City Thunder’s titanic forward…

Which team did he support in his childhood?
Toronto Raptors
In 2014, Durant has made the following declaration in Dan Patrick Show:
“Believe it or not, I truly wanted to play for Toronto Raptors, they were my favorite. They were newly established when I grow up, and I always wanted to be a part of them.”

Who is his closest friend?
D. J. Augustin

Why does he wear # 35 in his jersey?
Every jersey number comes up with its own story indeed. Durant’s reason for wearing #35 is for living some memories, and a bit of loyalty: Charles Craig, who was his first coach and a true mentor for Durant and helped his development as a player, has been killed at the age of 35…

Favorite music?
Besides basketball, it has been widely mentioned that Kevin Durant has decent skills in dancing and rap music. His teammates say that he starts immediately to dance when he hears some music anywhere; in fact, it’s been rumored that he wants to pursue a career in music producing when his basketball days are over.

What is the meaning of his backpack that he wears constantly and what does it contain?
Earphone, Bible, I-pad and phone battery charger are his indispensables. He wears backpack, because he still considers himself as a high school student in the first place.

His other nicknames?
K-Smoove, KD, Slim Reaper, The Servant

The record he broke in his rookie year
There are only 3 players in the NBA history that have reached a scoring average above 20 points (20.3) as a “teenager”; Kevin Durant, LeBron James and Carmelo Anthony.

Why Nike, rather than Adidas?
In his rookie year in the NBA, he had received a 7-year 70 Million$ contract from Adidas, but he chose to go with Nike for a 60 Million$, which is 10 Million$ lower than Adidas, because he was always wearing Nike since childhood and Adidas shoes were not comfy for him.

What would he become if he was not a basketball player?
Meteorologist 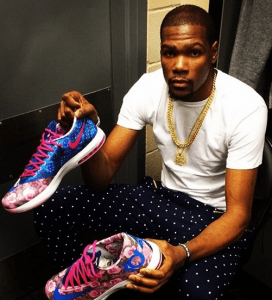 What is his pre-game hype song (for motivation)?
“Don’t make.” by 8ball n MJG.

The most important shot in his career?
The 3-point game-winner against Atlanta Hawks in his rookie year (which went to a double overtime until Durant sealed the deal).

How many siblings does he have?
He has a sister named Brianna and two brothers named Anthony and Rayvonne.