ALL YOU WANT TO KNOW ABOUT TONY PARKER…

We hereby present the unknown and non-fiction facts of the famous point guard of the San Antonio Spurs, who has 4 NBA Titles, 1 NBA Finals MVP Award, 6 NBA All-Star appearances and a EuroBasket trophy in 2013 with the French national team, in his resume.

His father was an Afro-American basketball player, whereas his mother was a Dutch model

He has two brothers; T.J and Pierre, which both of them also plays basketball

Is he married, does he have any kids?

He is married to French reporter Axelle Francine. They have a son named Josh together.

Relationships for the tabloid press

Prior to his current marriage, he was once married to the world-wide famous actress of Desperate Housewives series Eva Longoria. The couple did marry in 2007 and ended up in divorce in 2011. Onwards and upwards, Tony have dated with the famous WNBA superstar and the brand new assistant coach of the Spurs, Becky Hammon, for a little while after the divorce.

The most common one is the one formed up from his initials, T.P.; where some of his friends refer to him as Tony P. (Editor’s note: Why not “Teardrop” as a nickname? That’s his trademark move for sure…) 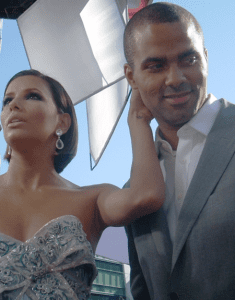 His father is American, his mother is Dutch, he himself was born in Belgium; so why is he a French citizen?

Although he was born in Belgium, he grew up in France. Then he was truly inspired from his total “mentor”, Jean Pierre Staelens, who was a famous former French basketball player and became a second father to Tony, which made Tony convert to French citizenship at the age of 15.

Just like the “Great Dirk” and “Titan” Gasol; NONE! He had just played for Paris Basket Racing for 2 years between 1999 and 2001. He is a Spur in the NBA since 2002 up to date. (E.N: A little spice for his first steps in the NBA; as he was an outcome of the famous scouting team of the Spurs (hail to R.C. Buford and Sam Presti), he was neither known nor selected by the great Spurs coach Gregg Popovich until the end of his first pre-draft try-out. He struggled to make an impact for Popovich, but Tony convinced him for a second try-out, where Popovich loved him and drafted him as a “draft steal” in 2001 Draft – 1st round, 28th pick!)

Brian McKnight and Montell Jordan. Besides them, he also likes to listen JayZ and the Ruff Ryders

He was a football fan instead of basketball in his childhood

Despite his father was a former basketball player, he liked to play and watch football (soccer). This situation has changed when he had a trip to Chicago and went for a Bulls game in 1991, as Tony admired MJ for real and began playing basketball.

The first European player to win the MVP Award

He was selected as the NBA Finals MVP in 2007, where Spurs also won the NBA Title.

He is a shareholder of the Asvel Villeurbanne

He owns the 20% of the French basketball club, and also played for a couple of months in the club in 2011, where NBA had an ongoing lock-out.

He worships animals, and especially cats. He has 4 cats as pet.

He made his own music album, which was named “Game Time”

If a movie was supposed to be made in the future about his life, who wants Tony to portray him?

Again, Will Smith. (E.N: He portrayed himself in a cameo appearance in the 2008 movie “Asterix at the Olympic Games”)

As mentioned before, Jean Pierre Staelens, a 100-time member of the French national basketball team, was the true mentor of Tony. He owns the lion’s share in Tony’s basketball career development from top to bottom. He passed away in the night of the 31 December 1999, just before the new millennium. Tony then took 9 as a jersey number in his memory.

This foundation is a non-profit establishment that has a branch in every developed country of the world and attempts to make the wishes of the children with terminal illnesses real.

He made his national team debut in 2001, at the age of 19, just after the national-team retirements of the Olympic Silver medalists of 2000; “King” Antoine Rigaudeau, Jim Bilba, Yann Bonato and Gadou brothers. There are only 3 national competitions where Tony was absent from the French national team in his career so far; and all of them are World Basketball Championship tournaments (2006, 2010 and 2014). Except those, he was a member of each and every national competition in which France had participated. In all of such tournaments, France was able to clinch a berth in the top 8 places of the competition. Though he did not compete in any World Championship, he managed to participate 2012 Olympics (where France ended up in 6th place) and leaded his team to earn 2 Bronze (2005, 2015), 1 Silver (2011) and 1 Gold medals (2013). He solely was a crucial factor in 2013 championship, especially against their archrivals Spain in the semi finals.

With surpassing the Greek legend “Ironman” Nikos Galis (1,030 pts) in EuroBasket 2015, he became the all-time leader for the most points scored in total in the EuroBasket competition history with 1,104 points in 68 games since his debut in 2001 EuroBasket. His longevity in this competition determined his place above the other European titans Dirk Nowitzki (1,052 pts) and Pau Gasol (1,044 pts).

In the new millennium, Parker (2001), Nowitzki (1998) and Gasol (2001 also) took their steps in the NBA arena as young prodigies, after the trial phase of the previous European legends such as Drazen Petrovic, Arvydas Sabonis, Sarunas Marciulions, Toni Kukoc, Dino Radja and Detlef Schrempf became successful to change the apprehension of the NBA teams for the game. These three superstars are the true pioneers of the modern European style and European player invasion to the NBA, together with Russia’s Andrei Kirilenko and Serbia’s Predrag Stojakovic (but the duration and achievements of the careers of the said trio were much more remarkable).

With his agility, penetration ability, passing instinct and his most famous go-to move “Teardrop” layup style, Tony will always be remembered as one of the greatest European players and NBA point guards of all time.

The personal ad writes itself… Go get them Tony!